Dogs communicate with us and other dogs primarily through their body language. Sometimes this can be obvious, like a wagging tail or a play bow, but other times body language may be quite subtle and hard to read, unless you know what to look for.

To help you better understand your dog’s emotions and how they feel from moment to moment and day to day, here are three important signs to look for to help you understand how your dog is feeling:

Probably the most obvious sign dog owners look for is their dog’s wagging tail. Tail wagging in dogs has been compared to smiling in humans as it provides a social signal similar to a polite greeting. But did you know that not all tail wags mean that your dog is happy?

The position of the tail provides an important clue as does the speed of the wag. For example, if the tail is held horizontally it can indicate a relaxed or attentive and alert dog. A tail that’s held low can signal the dog is feeling worried or showing submission. When a dog tucks its tail under its body this is a sign of significant fear. As the tail position becomes higher the dog is showing more assertiveness and warning others to back off.

The speed of the wag is important too, and usually indicates how excited a dog is feeling. A slow broad wag, which can also involve the hips, is often seen in a friendly greetings between dogs. Whereas a tail was that’s short and very fast can be an active threat and signals the dog is in “fight or flight” mode due to fear or anxiety.

Looking at the position of a dog’s ears can also provide some clues about how they’re feeling. Ears held forward and erect mean the dog is alert and probably listening to something of interest. Ears held slightly back often indicate fear or anxiety in response to something that’s happening in that moment. When a dog’s ears are held flat against their head this means the dog is extremely fearful and can also be seen in aggressive dogs.

Dogs can tell us a lot about how they’re feeling by the position of their body. A relaxed dog will often sit or lie down with their hips rolled to the side. Whereas a dog that’s feeling scared or unsure might cower or move away from something scary. A play bow is a great example of how a dog uses it’s body to communicate with us and other dogs. A play bow is a dog’s way of saying “Hey! I’m friendly! Want to play?”

The eyes and mouth can also provide clues as to how dogs are feeling and are important pieces of the body language puzzle.

With free videos and courses available on the internet, you can learn even more about how to read and understand your dog’s feelings. 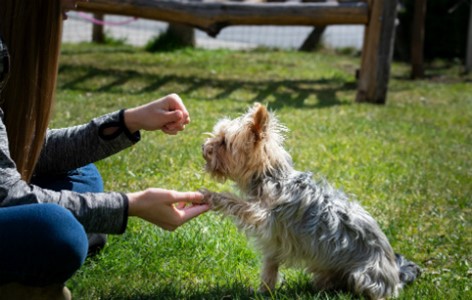